ps - report a snapshot of the current processes.

ps displays information about a selection of the active processes. If you want a repetitive update of the selection and the displayed information, use top instead.

This version of ps accepts several kinds of options:

Options of different types may be freely mixed, but conflicts can appear. There are some synonymous options, which are functionally identical, due to the many standards and ps implementations that this ps is compatible with.

Note that ps -aux is distinct from ps aux. The POSIX and UNIX standards require that ps -aux print all processes owned by a user named x, as well as printing all processes that would be selected by the -a option. If the user named x does not exist, this ps may interpret the command as ps aux instead and print a warning. This behavior is intended to aid in transitioning old scripts and habits. It is fragile, subject to change, and thus should not be relied upon.

The use of BSD-style options will add process state (stat=STAT) to the default display and show the command args (args=COMMAND) instead of the executable name. You can override this with the PS_FORMAT environment variable. The use of BSD-style options will also change the process selection to include processes on other terminals (TTYs) that are owned by you; alternately, this may be described as setting the selection to be the set of all processes filtered to exclude processes owned by other users or not on a terminal. These effects are not considered when options are described as being "identical" below, so -M will be considered identical to Z and so on.

Except as described below, process selection options are additive. The default selection is discarded, and then the selected processes are added to the set of processes to be displayed. A process will thus be shown if it meets any of the given selection criteria.

To see every process on the system using standard syntax:

To see every process on the system using BSD syntax:

To print a process tree:

To get info about threads:

To get security info:

To see every process running as root (real & effective ID) in user
format:

To see every process with a user-defined format:

Print only the process IDs of syslogd:

Print only the name of PID 42:

Select all processes except those that fulfill the specified conditions (negates the selection). Identical to -N.

These options accept a single argument in the form of a blank-separated or comma-separated list. They can be used multiple times. For example: ps -p "1 2" -p 3,4

Select by command name. This selects the processes whose executable name is given in cmdlist. NOTE: The command name is not the same as the command line. Previous versions of procps and the kernel truncated this command name to 15 characters. This limitation is no longer present in both. If you depended on matching only 15 characters, you may no longer get a match.

Select by process ID. Identical to -p and --pid.

Select by PID. This selects the processes whose process ID numbers appear in pidlist. Identical to p and --pid.

Select by process ID. Identical to -p and p.

Select by PID (quick mode). This selects the processes whose process ID numbers appear in pidlist. With this option ps reads the necessary info only for the pids listed in the pidlist and doesn’t apply additional filtering rules. The order of pids is unsorted and preserved. No additional selection options, sorting and forest type listings are allowed in this mode. Identical to q and --quick-pid.

Select by session ID. This selects the processes with a session ID specified in sesslist.

Select by tty. This selects the processes associated with the terminals given in ttylist. Terminals (ttys, or screens for text output) can be specified in several forms: /dev/ttyS1, ttyS1, S1. A plain "-" may be used to select processes not attached to any terminal.

Select by terminal. Identical to -t and t.

The effective user ID describes the user whose file access permissions are used by the process (see geteuid(2)). Identical to U and --user.

Select by real user ID (RUID) or name. Identical to -U.

Select by effective user ID (EUID) or name. Identical to -u and U.

These options are used to choose the information displayed by ps. The output may differ by personality.

is preloaded o (overloaded). The BSD O option can act like -O (user-defined output format with some common fields predefined) or can be used to specify sort order. Heuristics are used to determine the behavior of this option. To ensure that the desired behavior is obtained (sorting or formatting), specify the option in some other way (e.g. with -O or --sort). When used as a formatting option, it is identical to -O, with the BSD personality.

Like -o, but preloaded with some default columns. Identical to -o pid,format,state,tname,time,command or -o pid,format,tname, time,cmd, see -o below.

User-defined format. format is a single argument in the form of a blank-separated or comma-separated list, which offers a way to specify individual output columns. The recognized keywords are described in the STANDARD FORMAT SPECIFIERS section below. Headers may be renamed (ps -o pid,ruser=RealUser -o comm=Command) as desired. If all column headers are empty (ps -o pid= -o comm=) then the header line will not be output. Column width will increase as needed for wide headers; this may be used to widen up columns such as WCHAN (ps -o pid,wchan=WIDE- WCHAN-COLUMN -o comm). Explicit width control (ps opid, wchan:42,cmd) is offered too. The behavior of ps -o pid=X, comm=Y varies with personality; output may be one column named "X,comm=Y" or two columns named "X" and "Y". Use multiple -o options when in doubt. Use the PS_FORMAT environment variable to specify a default as desired; DefSysV and DefBSD are macros that may be used to choose the default UNIX or BSD columns.

Include some dead child process data (as a sum with the parent).

Repeat header lines, one per page of output.

Print no header line at all. --no-heading is an alias for this option.

Sorting order (overloaded). The BSD O option can act like -O (user-defined output format with some common fields predefined) or can be used to specify sort order. Heuristics are used to determine the behavior of this option. To ensure that the desired behavior is obtained (sorting or formatting), specify the option in some other way (e.g. with -O or --sort).

For sorting, obsolete BSD O option syntax is O[+|-]k1[,[+|-]k2[,...]]. It orders the processes listing according to the multilevel sort specified by the sequence of one-letter short keys k1,k2, ... described in the OBSOLETE SORT KEYS section below. The "+" is currently optional, merely re-iterating the default direction on a key, but may help to distinguish an O sort from an O format. The "-" reverses direction only on the key it precedes.

Print a help message. The section argument can be one of simple, list, output, threads, misc, or all. The argument can be shortened to one of the underlined letters as in: s|l|o|t|m|a.

This ps works by reading the virtual files in /proc. This ps does not need to be setuid kmem or have any privileges to run. Do not give this ps any special permissions.

CPU usage is currently expressed as the percentage of time spent running during the entire lifetime of a process. This is not ideal, and it does not conform to the standards that ps otherwise conforms to. CPU usage is unlikely to add up to exactly 100%.

The SIZE and RSS fields don’t count some parts of a process including the page tables, kernel stack, struct thread_info, and struct task_struct. This is usually at least 20 KiB of memory that is always resident. SIZE is the virtual size of the process (code+data+stack).

Processes marked <defunct> are dead processes (so-called "zombies") that remain because their parent has not destroyed them properly. These processes will be destroyed by init(8) if the parent process exits.

Commands options such as ps -aux are not recommended as it is a confusion of two different standards. According to the POSIX and UNIX standards, the above command asks to display all processes with a TTY (generally the commands users are running) plus all processes owned by a user named x. If that user doesn’t exist, then ps will assume you really meant ps aux.

The sum of these values is displayed in the "F" column, which is provided by the flags output specifier:

Here are the different values that the s, stat and state output specifiers (header "STAT" or "S") will display to describe the state of a process:

For BSD formats and when the stat keyword is used, additional characters may be displayed:

These keys are used by the BSD O option (when it is used for sorting). The GNU --sort option doesn’t use these keys, but the specifiers described below in the STANDARD FORMAT SPECIFIERS section. Note that the values used in sorting are the internal values ps uses and not the "cooked" values used in some of the output format fields (e.g. sorting on tty will sort into device number, not according to the terminal name displayed). Pipe ps output into the sort(1) command if you want to sort the cooked values. 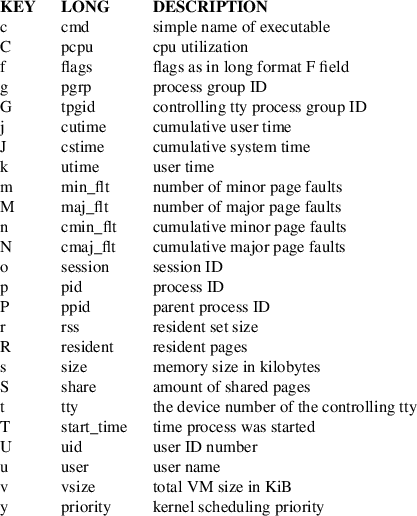 This ps supports AIX format descriptors, which work somewhat like the formatting codes of printf(1) and printf(3). For example, the normal default output can be produced with this: ps -eo "%p %y %x %c". The NORMAL codes are described in the next section.

Here are the different keywords that may be used to control the output format (e.g., with option -o) or to sort the selected processes with the GNU-style --sort option.

This version of ps tries to recognize most of the keywords used in other implementations of ps.

Some keywords may not be available for sorting. 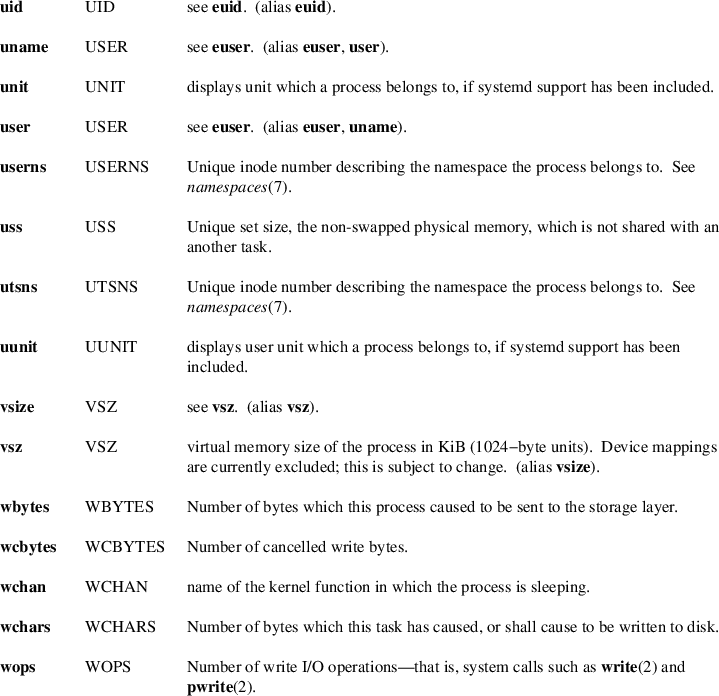 Default output format override. You may set this to a format string of the type used for the -o option. The DefSysV and DefBSD values are particularly useful.

When set to "on", acts as POSIXLY_CORRECT.

In general, it is a bad idea to set these variables. The one exception is CMD_ENV or PS_PERSONALITY, which could be set to Linux for normal systems. Without that setting, ps follows the useless and bad parts of the Unix98 standard. 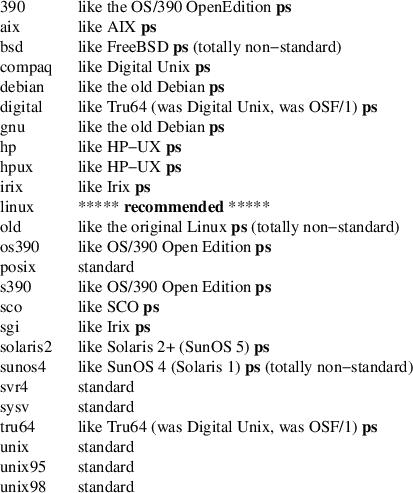 This ps conforms to:

ps was originally written by lankeste [AT] fwi.nl">Branko Lankester. johnsonm [AT] redhat.com">Michael K. Johnson re-wrote it significantly to use the proc filesystem, changing a few things in the process. mjshield [AT] nyx.edu">Michael Shields added the pid-list feature. cblake [AT] bbn.com">Charles Blake added multi-level sorting, the dirent-style library, the device name-to-number mmaped database, the approximate binary search directly on System.map, and many code and documentation cleanups. David Mossberger-Tang wrote the generic BFD support for psupdate. albert [AT] users.net">Albert Cahalan rewrote ps for full Unix98 and BSD support, along with some ugly hacks for obsolete and foreign syntax.