Comparison Options [-d] [-c] [-n]
infocmp compares the terminfo description of the first terminal termname with each of the descriptions given by the entries for the other terminal’s termnames. If a capability is defined for only one of the terminals, the value returned depends on the type of the capability:

Use the -q option to show the distinction between absent and cancelled capabilities.

These options produce a list which you can use to compare two or more terminal descriptions:

The -u option provides a related output, showing the first terminal description rewritten to use the second as a building block via the “use=” clause.

Normally only the conventional capabilities are shown. Use the -x option to add the BSD-compatibility capabilities (names prefixed with “OT”).

If no termnames are given, infocmp uses the environment variable TERM for each of the termnames.

If no termnames are given, the environment variable TERM will be used for the terminal name.

The source produced by the -C option may be used directly as a termcap entry, but not all parameterized strings can be changed to the termcap format. infocmp will attempt to convert most of the parameterized information, and anything not converted will be plainly marked in the output and commented out. These should be edited by hand.

For best results when converting to termcap format, you should use both -C and -r. Normally a termcap description is limited to 1023 bytes. infocmp trims away less essential parts to make it fit. If you are converting to one of the (rare) termcap implementations which accept an unlimited size of termcap, you may want to add the -T option. More often however, you must help the termcap implementation, and trim excess whitespace (use the -0 option for that).

All termcap variables no longer supported by terminfo, but which are derivable from other terminfo variables, will be output. Not all terminfo capabilities will be translated; only those variables which were part of termcap will normally be output. Specifying the -r option will take off this restriction, allowing all capabilities to be output in termcap form. Normally you would use both the -C and -r options. The actual format used incorporates some improvements for escaped characters from terminfo format. For a stricter BSD-compatible translation, use the -K option rather than -C.

Note that because padding is collected to the beginning of the capability, not all capabilities are output. Mandatory padding is not supported. Because termcap strings are not as flexible, it is not always possible to convert a terminfo string capability into an equivalent termcap format. A subsequent conversion of the termcap file back into terminfo format will not necessarily reproduce the original terminfo source.

Some common terminfo parameter sequences, their termcap equivalents, and some terminal types which commonly have such sequences, are:

The order of the other termname entries is significant. Since the terminfo compiler tic does a left-to-right scan of the capabilities, specifying two use= entries that contain differing entries for the same capabilities will produce different results depending on the order that the entries are given in. infocmp will flag any such inconsistencies between the other termname entries as they are found.

Alternatively, specifying a capability after a use= entry that contains that capability will cause the second specification to be ignored. Using infocmp to recreate a description can be a useful check to make sure that everything was specified correctly in the original source description.

Another error that does not cause incorrect compiled files, but will slow down the compilation time, is specifying extra use= fields that are superfluous. infocmp will flag any other termname use= fields that were not needed.

Changing Databases [-A directory] [-B directory]
Like other ncurses utilities, infocmp looks for the terminal descriptions in several places. You can use the TERMINFO and TERMINFO_DIRS environment variables to override the compiled-in default list of places to search (see curses(3X) for details).

You can also use the options -A and -B to override the list of places to search when comparing terminal descriptions:

Before ncurses 5.0, the split between the -e and -E options was not needed; but support for extended names required making the arrays of terminal capabilities separate from the TERMTYPE structure.

For each string, the code tries to analyze it into actions in terms of the other capabilities in the entry, certain X3.64/ISO 6429/ECMA-48 capabilities, and certain DEC VT-series private modes (the set of recognized special sequences has been selected for completeness over the existing terminfo database). Each report line consists of the capability name, followed by a colon and space, followed by a printable expansion of the capability string with sections matching recognized actions translated into {}-bracketed descriptions.

Here is a list of the DEC/ANSI special sequences recognized: 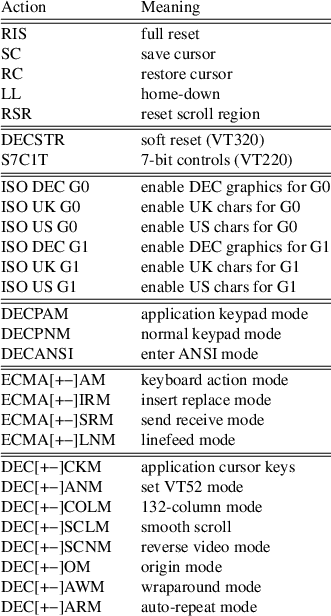 It also recognizes a SGR action corresponding to ANSI/ISO 6429/ECMA Set Graphics Rendition, with the values NORMAL, BOLD, UNDERLINE, BLINK, and REVERSE. All but NORMAL may be prefixed with

An SGR0 designates an empty highlight sequence (equivalent to {SGR:NORMAL}).

For example, this prints the compiled terminfo value as a string which could be assigned to the TERMINFO environment variable:

Restrict output to a given subset. This option is for use with archaic versions of terminfo like those on SVr1, Ultrix, or HP/UX that do not support the full set of SVR4/XSI Curses terminfo; and variants such as AIX that have their own extensions incompatible with SVr4/XSI.

The -s option sorts the fields within each type according to the argument below:

If the -s option is not given, the fields printed out will be sorted alphabetically by the terminfo name within each type, except in the case of the -C or the -L options, which cause the sorting to be done by the termcap name or the long C variable name, respectively.

changes the output to width characters.

Although System V Release 2 provided a terminfo library, it had no documented tool for decompiling the terminal descriptions. Tony Hansen (AT&T) wrote the first infocmp in early 1984, for System V Release 3.

Eric Raymond used the AT&T documentation in 1995 to provide an equivalent infocmp for ncurses. In addition, he added a few new features such as:

In 2010, Roy Marples provided an infocmp program for NetBSD. It is less capable than the SVr4 or ncurses versions (e.g., it lacks the sorting options documented in X/Open), but does include the -x option adapted from ncurses.

X/Open Curses, Issue 7 (2009) provides a description of infocmp. It does not mention the options used for converting to termcap format.

SVr4 infocmp does not distinguish between absent and cancelled capabilities. Also, it shows missing integer capabilities as -1 (the internal value used to represent missing integers). This implementation shows those as “NULL”, for consistency with missing strings.

The -r option’s notion of “termcap” capabilities is System V Release 4’s. Actual BSD curses versions will have a more restricted set. To see only the 4.4BSD set, use -r -RBSD.