Xvt is a VT100 terminal emulator for X. It is intended as a replacement for xterm(1) for users who do not require the more esoteric features of xterm. Specifically xvt does not implement the Tektronix 4014 emulation, session logging and toolkit style configurability. As a result, xvt uses much less swap space than xterm − a significant advantage on a machine serving many X sessions.

The options supported by xvt (which, with the exception of -msg, are a subset of those supported by xterm) are listed below. Most command line arguments have X resource equivalents and these are listed in the following table.
-e command [ arguments ]

Run the command with its command line arguments in the xvt window. If this option is used, it must be the last on the command line. If there is no -e option then the default is to run the program specified by the SHELL environment variable or, failing that, sh(1). This option also causes the window title and icon name to be set to the name of the program being executed if the are not overwritten by a more specific option.

Attempt to open the xvt window on the named X display. In the absence if this option, the display specified by the DISPLAY environment variable is used.

Create the window with the specified X window geometry.

Use the specified color as the window’s background color.

Use the specified colour as the window’s foreground color.

Set the color used for the text cursor.

Set the border color. As with border width, this option will usually be disregarded with respect to the window’s outer border. It does, however, set the color of the line separating the scroll bar from the main part of the window.

Set the font used for the vt100 bold rendition style. If this option is not set then xvt will render in bold by overprinting the normal font.

Set the name that is used when looking up X resource values for this instance of xvt. This option also sets the icon name and window title unless they are set explicitly.

Set the string that is displayed in the window’s title bar if it has one.

Set the name that will be used to label the window’s icon or displayed in an icon manager window. This option also sets the window’s title unless it is set explicitly.

Set an upper bound for the number of lines that will be saved when they have scrolled off the top of the window.

Input or modify the character classes that are used to determine what is a word when a double click is used to select a word of displayed text. This is identical to the same option in xterm − see the xterm manual page for a description of the syntax of string.

Start up with the window already iconized.

Almost all the command line options have X resource counterparts and these are listed in the following table. Like xterm, xvt uses the class name XTerm and so resource options set for XTerm will work for both xterm and xvt windows. 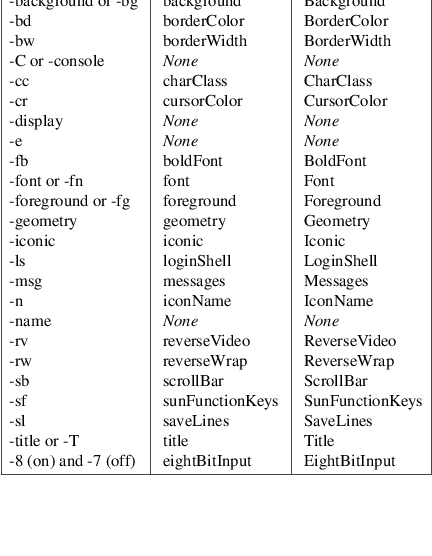 One occasionally confusing aspect of xvt and other X applications is the collection of names that an application window can have and the relationship between the names and the command line options used to set them. This section attempts to make the situation a bit clearer in the case of xvt.

In fact, each terminal window has three names, its resource name, its title and its icon name. These three names are distinct and have different functions, although they usually have the same value. The resource name is the command name used to identify X resource options in the resources database, The title is the text that is displayed in the title bar, if there is one, and the icon name is the name that appears in the window’s icon or represents it in the icon manager window.

The rule about which option sets which name is that -name and -e set both the title and the icon name in addition to their main function and -n sets the title as well as the icon name. Conflicts are resolved by giving the options priorities which are, in increasing order, -e, -name, -n and -title. Hence, for example, -e only sets the title if none of the other options is used.

Lines of text that scroll off the top of the xvt window are saved automatically (up to a preset maximum number) and can be viewed by scrolling them back into the window with the scrollbar. The scrollbar itself can be displayed or hidden by clicking any mouse button in the window while holding down the CONTROL key on the keyboard. When using the scrollbar, the left and right mouse buttons are used for scrolling by a few lines at a time and the middle button is used for continuous scrolling. To use the middle button, press it in the scroll bar and hold it down. the central shaded part of the scrollbar will then attach itself to the cursor and can be slid up or down to show different parts of the sequence of saved lines. When scrolling with the left and right buttons, the left button is used to scroll up and the right is used to scroll down. Assuming that there are enough hidden lines, the distance scrolled with either button is equal to the number of lines between the cursor and the top of the window. Hence, pressing the left cursor opposite a line of text will result in that line being moved to be the top of the window and pressing the right button will cause the top line to be moved down so that it is opposite the cursor.

Xvt uses the same kind of text selection and insertion mechanism as xterm. Pressing and releasing the middle mouse button in an xvt window causes the current text selection to be inserted as if it had been typed on the keyboard. For the insertion to take place, both the button press and the button release need to be done with the cursor in the xvt window.

The left and right mouse buttons are used to select text, with the left button being used to start a selection and the right button being used to modify an existing selection. Any continuous block of displayed text can be selected. If both ends of the text block are visible in the window then the easiest way to select it is to position the cursor at one end and press the left mouse button, then drag the cursor to the other end with the button held down before releasing the button. If the block is larger than the window then you must first use the left mouse button to select one end, then use the scroll bar to scroll the other end into view and finally use the right mouse button to extend the selection. The effect of pressing the right mouse button is to move the nearest end of the current selection to the current cursor position.

If you want to change the character classes so that, for example, you can select a UNIX pathname or a mail address in one double click, then you can do so by using the -cc command line option or the charClass X resource. Multiple clicking can be combined with dragging to select a sequence of consecutive words or lines.

Although xvt essentially mimics the behaviour of xterm in its support of text selection and insertion, there are a couple of minor differences:

Pasting very large quantities of text does not work.