If si_errno is non-zero, it contains an error number associated with this signal, as defined in <errno.h>.

si_code contains a code identifying the cause of the signal.

If the value of the si_code member is SI_NOINFO, only the si_signo member of siginfo_t is meaningful, and the value of all other members is unspecified.

User Signals
If the value of si_code is less than or equal to 0, then the signal was generated by a user process (see kill(2), _lwp_kill(2), sigqueue(3RT), sigsend(2), abort(3C), and raise(3C)) and the siginfo structure contains the following additional information:

If the signal was generated by a user process, the following values are defined for si_code:
SI_USER

The signal was sent by sigqueue(3RT).

The signal was generated by the expiration of a timer created by timer_settime(3RT).

The signal was generated by the completion of an asynchronous I/O request.

The signal was generated by the arrival of a message on an empty message queue. See mq_notify(3RT).

System Signals
Non-user generated signals can arise for a number of reasons. For all of these cases, si_code contains a positive value reflecting the reason why the system generated the signal: 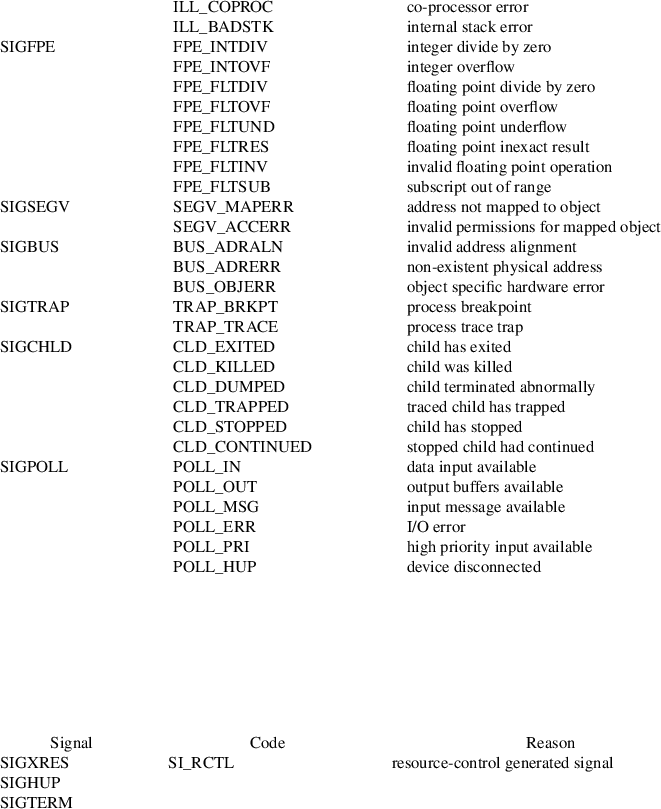 Signals can also be generated from the resource control subsystem. Where these signals do not already possess kernel-level siginfo codes, the siginfo si_code will be filled with SI_RCTL to indicate a kernel-generated signal from an established resource control value.

The uncatchable signals SIGSTOP and SIGKILL have undefined siginfo codes.

In addition, the following signal-dependent information is available for kernel-generated signals:

For SIGCHLD signals, if si_code is equal to CLD_EXITED, then si_status is equal to the exit value of the process; otherwise, it is equal to the signal that caused the process to change state. For some implementations, the exact value of si_addr might not be available; in that case, si_addr is guaranteed to be on the same page as the faulting instruction or memory reference.