mairix indexes and searches a collection of email messages. The folders containing the messages for indexing are defined in the configuration file. The indexing stage produces a database file. The database file provides rapid access to details of the indexed messages during searching operations. A search normally produces a folder (so-called mfolder) containing the matched messages. However, a raw mode (−r) exists which just lists the matched messages instead.

It can operate with the following folder types

mairix decides whether indexing or searching is required by looking for the presence of any search-patterns on the command line.

Normally mairix will do some internal integrity tests on the database. The -Q option removes these checks, making mairix run faster, but it will be less likely to detect internal problems if any bugs creep in.

The nochecks directive in the rc file has the same effect.

mairix locks its database file during any indexing or searching operation to prevent multiple indexing runs interfering with each other, or an indexing run interfering with search runs. The --unlock option removes the lockfile before doing the requested indexing or searching operation. This is a convenient way of cleaning up a stale lockfile if an earlier run crashed for some reason or was aborted.

Cause stale (dead) messages to be purged from the database during an indexing run. (Normally, stale messages are left in the database because of the additional cost of compacting away the storage that they take up.)

When processing maildir and MH folders, mairix normally compares the mtime and size of each message against the values stored in the database. If they have changed, the message will be rescanned. This check requires each message file to be stat’ed. For large numbers of messages in these folder types, this can be a sizeable overhead.

This option tells mairix to assume that when a message currently on-disc has a name matching one already in the database, it should assume the message is unchanged.

A later indexing run without using this option will fix up any rescans that were missed due to its use.

This option should only be used for debugging.
If a new database is created, hash is used as hash key, instead of a random hash.

Append newly matches messages to the current mfolder instead of creating the mfolder from scratch.

As well as returning the matched messages, also return every message in the same thread as one of the real matches.

Instead of creating an mfolder containing the matched messages, just show their paths on stdout.

Instead of creating an mfolder containing the matched messages, display an excerpt from their headers on stdout. The excerpt shows To, Cc, From, Subject and Date. With IMAP source folders, this requires downloading each matched message from the IMAP server.

Instead of creating symbolic links, force the use of hardlinks. This helps mailers such as alpine to realize that there are new mails in the search folder.

Specify a temporary alternative path for the mfolder to use, overriding the mfolder directive in the rc file.

mairix will refuse to output search results into any folder that appears to be amongst those that are indexed. This is to prevent accidental deletion of emails.

Message body is taken to mean any body part of type text/plain or text/html. For text/html, text within meta tags is ignored. In particular, the URLs inside <A HREF="..."> tags are not currently indexed. Non-text attachments are ignored. If there’s an attachment of type message/rfc822, this is parsed and the match is performed on this sub-message too. If a hit occurs, the enclosing message is treated as having a hit.

Match messages with Date: headers lying in the specific range.

For example, to match messages between 10kilobytes and 20kilobytes in size, the following search term can be used:

The attachment name is determined from the name=xxx or filename=xxx qualifiers on the Content-Type: and Content-Disposition: headers respectively.

Match messages with particular flag settings. The available flags are ’s’ meaning seen, ’r’ meaning replied, and ’f’ meaning flagged. The flags are case-insensitive. A flag letter may be prefixed by a ’-’ to negate its sense. Thus

Note that the flag characters and their meanings agree with those used as the suffix letters on message filenames in maildir folders.

Searching for a match amongst more than one part of a message
Multiple body parts may be grouped together, if a match in any of them is sought. Common examples follow.
tc:word

Match word in either the To: or Cc: headers (or both).

Match word in either the Subject: header or the message body (or both).

The a: search pattern is an abbreviation for tcf:; i.e. match the word in the To:, Cc: or From: headers. ("a" stands for "address" in this case.)

Match words
The word argument to the search strings can take various forms.

This matches if both the words are matched in the specified message part.

This matches if either of the words are matched in the specified message part.

Match any word containing substring as a substring

Match any word containing substring, allowing up to N errors in the match. For example, if N is 1, a single error is allowed, where an error can be

Match any word containing substring as a substring, with the requirement that substring occurs at the beginning of the matched word.

Precedence matters
The binding order of the constructions is:

There are 4 basic formats:
d:start-end

Specify both start and end explicitly

The start and end can be specified either absolute or relative. A relative endpoint is given as a number followed by a single letter defining the scaling:

Months are always treated as 30 days, and years as 365 days, for this purpose.

In the examples below, suppose the current date is Sunday May 18th, 2003 (when I started to write this material.) 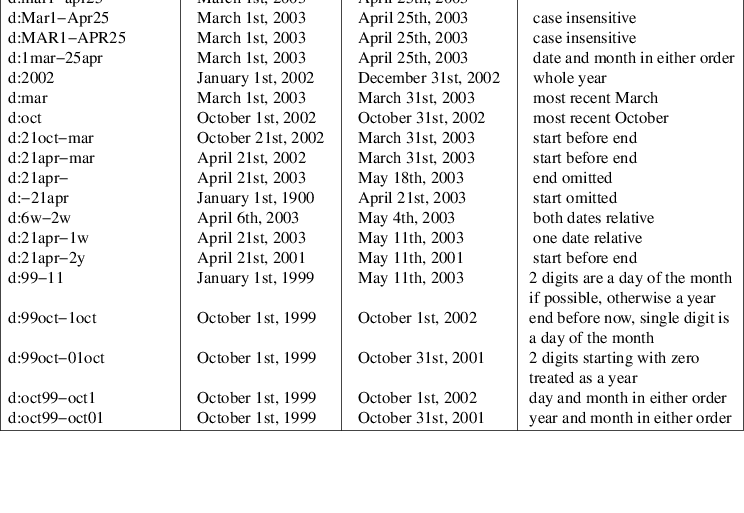 The principles in the table work as follows.

SETTING UP THE MATCH FOLDER

If the match folder does not exist when running in search mode, it is automatically created. For ’mformat=maildir’ (the default), this should be all you need to do. If you use ’mformat=mh’, you may have to run some commands before your mailer will recognize the folder. e.g. for mutt, you could do

which seems to work. Alternatively, within mutt, you could set MBOX_TYPE to ’mh’ and save a message to ’+mfolder’ to have mutt set up the structure for you in advance.

If you use Sylpheed, the best way seems to be to create the new folder from within Sylpheed before letting mairix write into it.

Suppose my email address is <richard [AT] doesnt.exist>.

Either of the following will match all messages newer than 3 months from me with the word ’chrony’ in the subject line:

Suppose I don’t mind a few spurious matches on the address, I want a wider date range, and I suspect that some messages I replied to might have had the subject keyword spelt wrongly (let’s allow up to 2 errors):

mairix works exclusively in terms of words. The index that’s built in indexing mode contains a table of which words occur in which messages. Hence, the search capability is based on finding messages that contain particular words. mairix defines a word as any string of alphanumeric characters + underscore. Any whitespace, punctuation, hyphens etc are treated as word boundaries.

mairix has special handling for the To:, Cc: and From: headers. Besides the normal word scan, these headers are scanned a second time, where the characters ’@’, ’-’ and ’.’ are also treated as word characters. This allows most (if not all) email addresses to appear in the database as single words. So if you have a mail from wibble [AT] foobar.zzz, it will match on both these searches

It should be clear by now that the searching cannot be used to find messages matching general regular expressions. This has never been much of a limitation. Most searches are for particular keywords that were in the messages, or details of the recipients, or the approximate date.

It’s also worth pointing out that there is no ’locality’ information stored, so you can’t search for messages that have one words ’close’ to some other word. For every message and every word, there is a simple yes/no condition stored - whether the message contains the word in a particular header or in the body. So far this has proved to be adequate. mairix has a similar feel to using an Internet search engine.

We need a plugin scheme to allow more types of attachment to be scanned and indexed.